You are here: Home / Everything You Need To Know About Guarana

Everything You Need To Know About Guarana 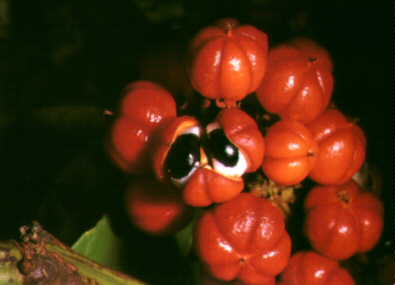 Guarana is a native climbing evergreen vine found in the Amazon. It is a berry that has many uses, including increasing fat-burning ability and energy.

Guarana soft drinks are wildly popular in Brazil, and have been marketed in other countries around the world as energy drinks. It comes in other forms, including chocolate bars, chewing gum, powder, syrup and capsules. These products might be difficult to find outside of the Brazilian marketplace but can be found in some health food stores in the United States.

Guarana can be found in many sports nutrition products but can be taken alone in dosages of 50 to 250 milligrams spread out throughout the day.

The seeds have seven per cent more caffeine than coffee beans. The biggest difference between the caffeine found in coffee beans and that of guarana, is that guarana’s caffeine is released much more slowly. This provides longer and more sustained stamina.

Some precautions must be taken when including guarana into your diet. As with any caffeinated product, guarana may cause insomnia, trembling, anxiety, palpitations, urinary frequency, and hyperactivity.

Guaraná should be avoided during pregnancy and while nursing. People with cardiac problems or high blood pressure should also avoid the use of guarana. Be sure to check with your doctor first.